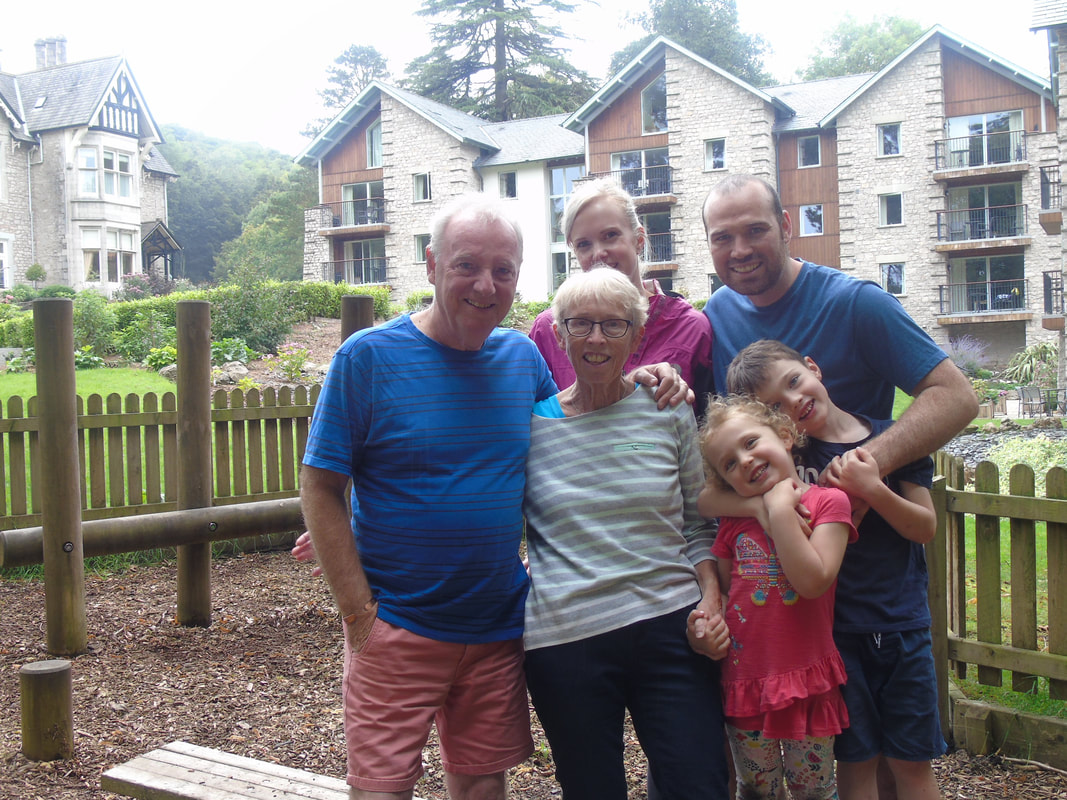 The Steward family on tour at Merlewood in the Lake District.
Tuesday 21st August

​Arrived at Merlewood around 3.15 pm and had a look round before going to our three-bedroomed apartment which is up to the usual HPB standards and one of the best, if not the best, we have had. Had time for a cup of coffee on the balcony before the remainder of the family - Matt and Emma, Elliot and Poppy - arrived. Had a game of crazy golf and another look round and then got the youngsters to bed and spent the rest of the evening playing cards. 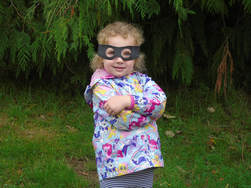 Being in the Lake District we shouldn't be surprised that today it rained for much of the day - so much of it was spent playing games indoors. Managed to have a swim and, when the weather did improve, we had a walk round the woods to do a nature trail with the children.

The rain again spoiled what would have been a nice day. This summer we have had hundreds of dry days and almost drought conditions. Now we seem to have nothing but rain. It was forecast but when we got up it was dry so we decided to go on a nature trail at Grisedale. It was a 14 mile drive and we took a picnic with us. Had a cup of coffee at the forest cafe and then started the trail. Midway round the rain started and we ended up trying to get as much shelter as we could under the trees and then having to run back to the car.

So we drove back to Merlewood, almost getting lost on some single track roads, and by the time we got back it was still raining. So we had our picnic on the floor of the lounge of the apartment! Spent the rest of the day swimming, playing indoor games. Eventually went into Grange Over Sand to get some fish and chips for supper. Our photographs below are taken shortly before the rain started.
​Friday 24th August

The rain held off until much later today so we were able to get out and visit an RSPB reserve at Silverdale. Decided to go by train to firstly save having to drive and secondly so that we could have a good view of Morecambe Bay. We did drive into Grange and parked in the car park close to the station. Picked up the tickets and had a 10 minute wait for the train which was on its way to Lancaster.

Silverdale was just two stops and took only 10 minutes which was just as well as there were no seats vacant and only two carriages. Apparently Northern Rail are going on regular weekend strikes. The rail service is just not fit for purpose, despite its claim that there is an 80% approval rate.

The rail station at Silverdale seemed to be in the middle of nowhere, but we did find the RSPB reserve at Leighton Moss. Doing the forest trail took the rest of the morning and included lots of visits to hides to see the birds and wildlife which Elliot and Poppy enjoyed. Noted that there was a hide named after Eric Morecambe who was a keen bird-watcher (see later for more about Eric Morecambe). Pictures from our visit below.

We caught a slightly larger train back to Grange (three carriages this time) but still standing room only. Got back to the car to find a penalty notice on my windscreen - an absolute nonsense as I paid the full parking fee. It gave me a receipt but no ticket. I clearly displayed that receipt. Got another ticket so that we could spend some time in Grange. Had a late lunch at a pleasant cafe and then a general look round the town and a bit of food shopping.

​By that time it had started raining again so we had to run back to the car park. Once back at Merlewood went for a long swim. 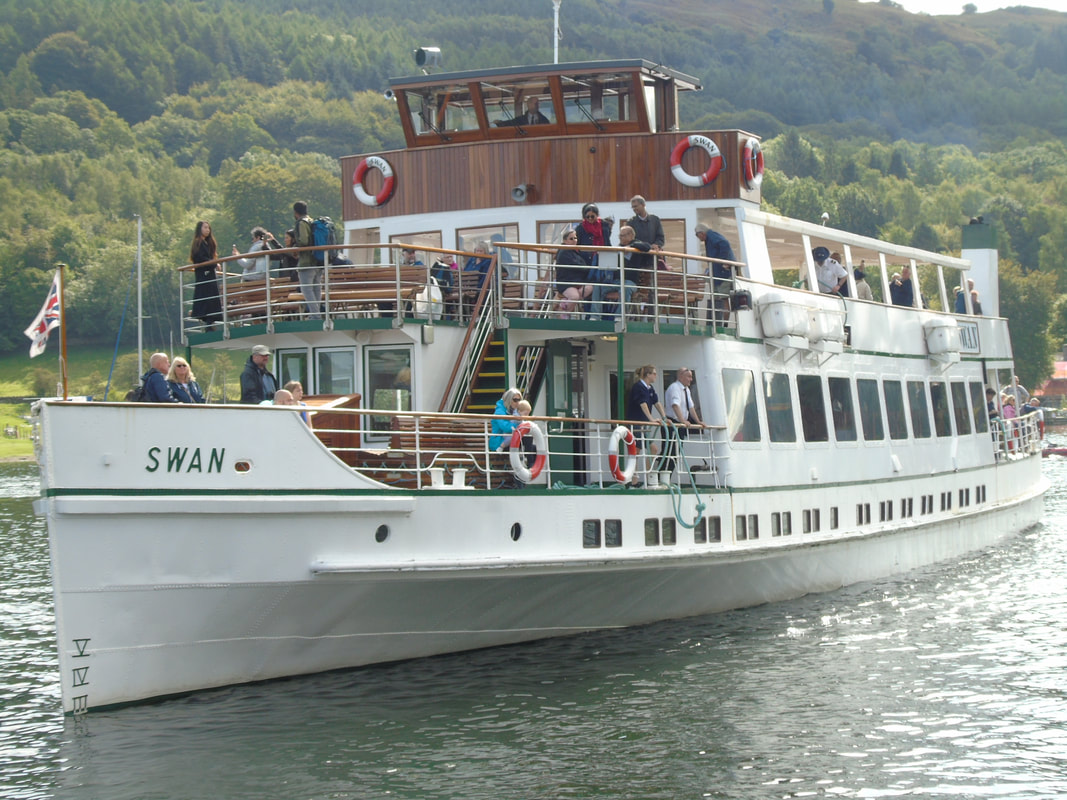 ​A trip on Lake Windermere today. We joined the Bank Holiday crowds which might have been a mistake as Bowness was uncomfortably full of tourists. It was only a six mile drive to Lakeside where we were able to park the car and catch the steamer for the 40 minute trip to Bowness.

Trying to work out whether we like Bowness was impossible as there were just too many people around. So we decided to take the children to the Beatrix Potter exhibition which was colourful as I hope the photographs below show.
After the exhibition we found a cafe for lunch and then returned to the pier to cram onto the steamer back to Lakeside. Images of Lake Windermere below. 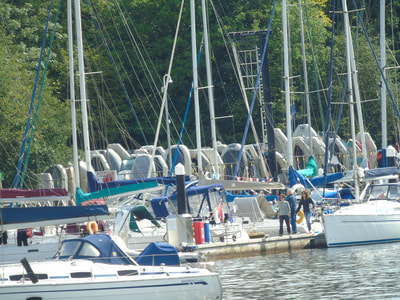 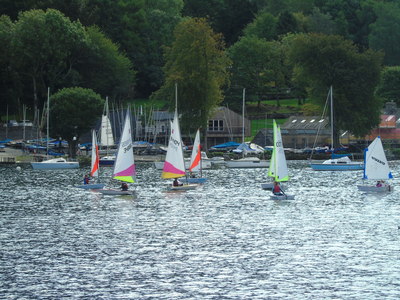 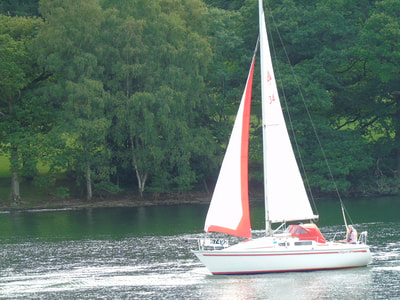 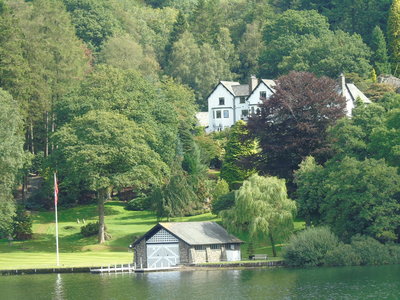 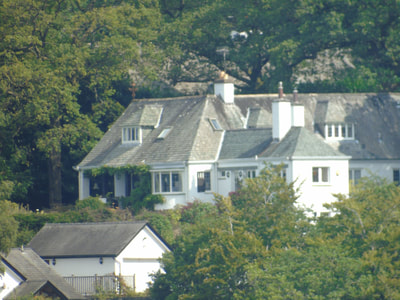 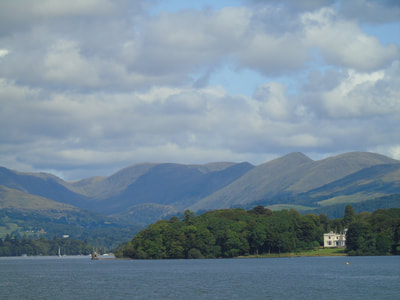 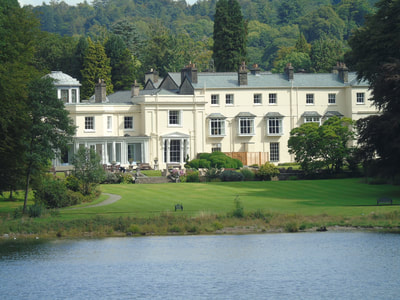 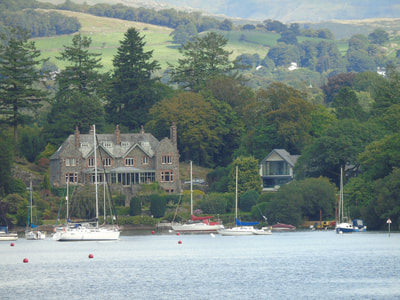 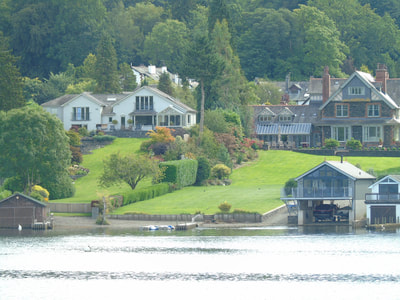 Today it rained and rained and when it had finished raining it rained some more. It meant spending most of the day in the apartment apart from driving into Grange for Sunday lunch at the cafe which is run by the same people as the shop at Merlewood. We had to wait for 20 minutes for lunch.

After lunch went back to the apartment and Matt, Emma and the kids loaded up their car and set off for home and we could do little else than watch television - the weather was that bad. 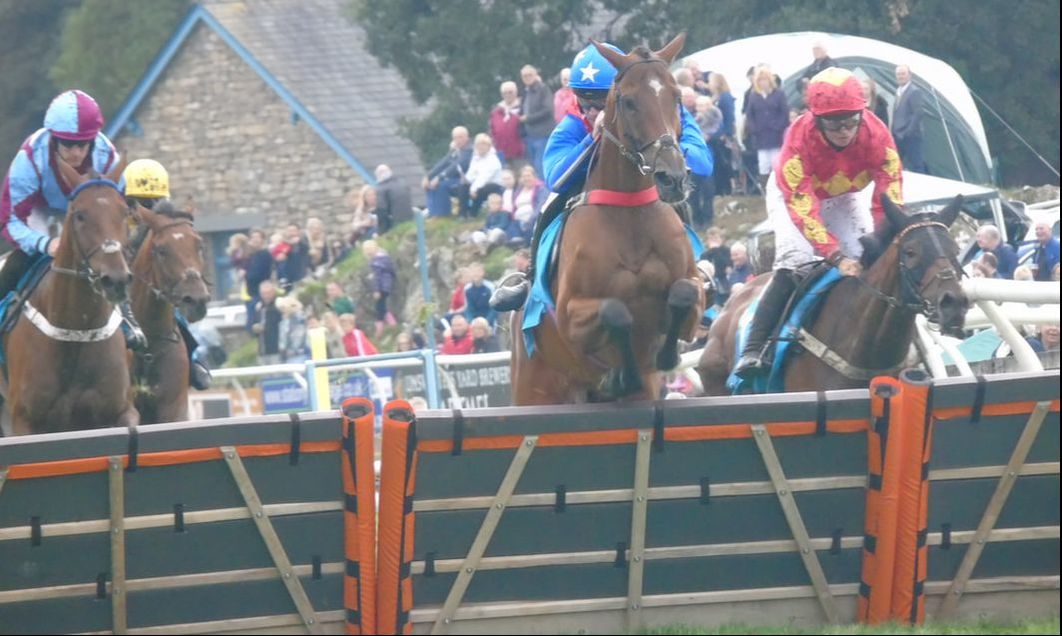 ​Decided to go for a walk today - the final Bank Holiday before Christmas. So we walked to the top of Grange Fell and down into Cartmel and from there we walked to Grange Over Sands and then back to Merlewood - a distance of around 11 miles.

We woke up to rain and had to wait until past 10 am to set off and even then it was raining. The forecast was for things to improve. At the top of the Fell we got good views over Morecambe Bay as the weather lifted. It was still unpleasant at times with high winds and driving rain.

​Trying to find a path down to Cartmel was difficult and we had to double back on a couple of occasions and then walk along a busy road full of traffic going to the races. Cartmel turned out to be a smallish village with thousands of people all headed for the races with the track just through the village and easily within walking distance.

But we weren't going to the races, although I did capture the above image over a fence as we watched some of the first race. We found a cafe and I had potted shrimps and then a second cafe for sticky toffee pudding which apparently was invented in Cartmel, although there seem to be other places making the same claim. Had a look round and visited the church and then walked along the road back into Grange. Much of it was an uphill struggle.

​Wandered along the prom and eventually back to Merlewood and by the time we got back we had had enough of walking. Pictures below are a mix of Grange Fell, Cartmel and Grange Over Sands. 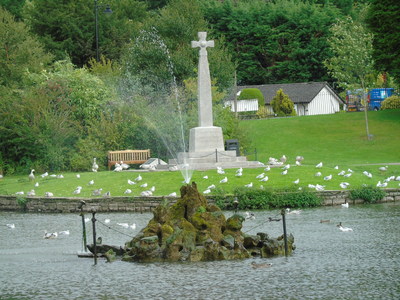 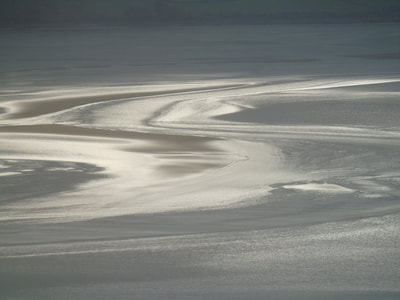 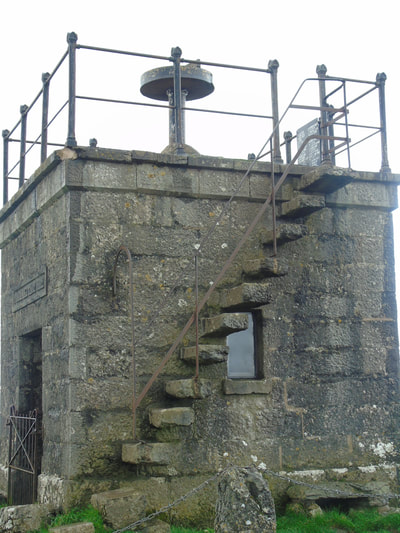 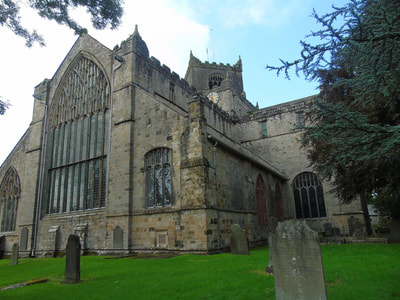 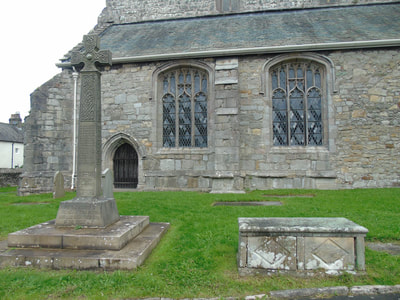 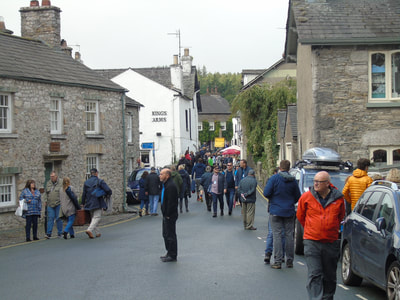 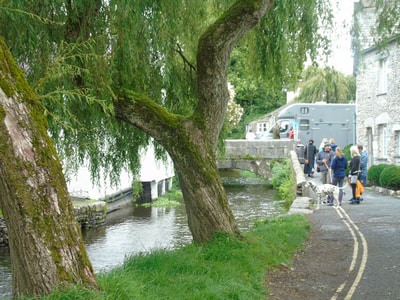 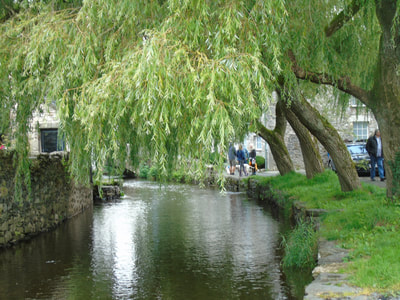 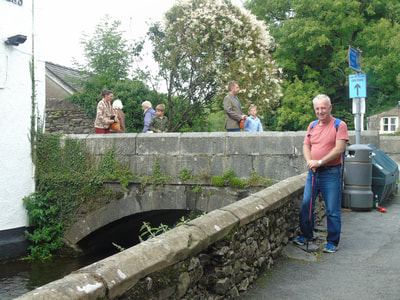 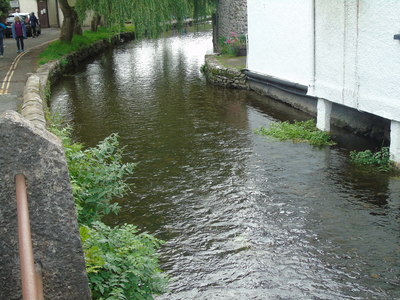 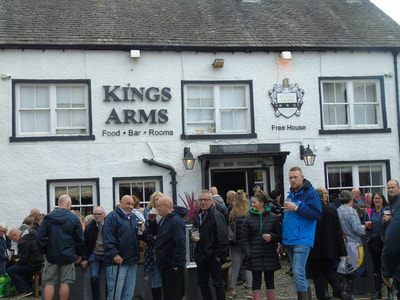 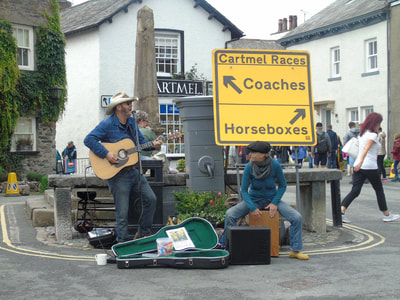 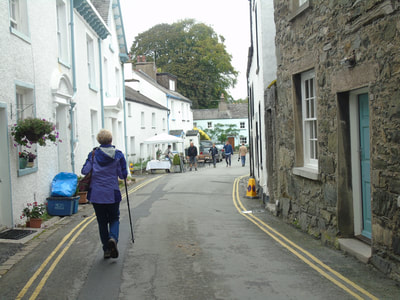 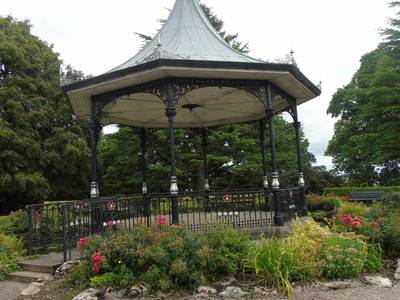 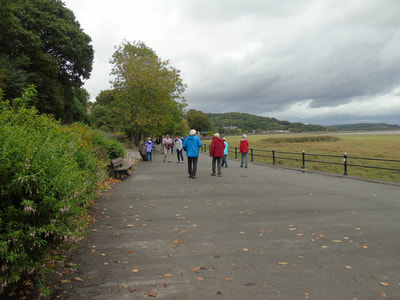 Back home again after a drive of almost 300 miles. A long day on the road with just two stops on the way. Early morning was all about packing, loading up the car, getting ready after breakfast and setting off. Drove around Morecambe Bay and parked in a side street and really liked Morecambe. One side of the road is full of gardens, greenery, the bay and a beach and the other is full of rundown shops.
On the front facing the road is a statue of John Eric Bartholomew, better known as Eric Morecambe who was born in the town and became part of the most successful comedy duo of all time - along with Ernie Wise. The floor around the statue contains the names of celebrities who appeared on the Morecambe and Wise shows along with script writers and others involved in their success. It also tells us that half of the population of the UK tuned into the 1975 Christmas special. As a friend said "Christmas in the seventies was Morecambe and Wise.

​Apart from M and W another iconic piece of Morecambe life is the Midland Hotel (images of which are below). This iconic Grade Two listed Art Deco building was opened in 1933. The London, Midland and Scottish Railway Company had taken the bold step of replacing its old Victorian hotel on Morecambe's seafront with a sparkling white Modernist structure - quite unlike anything seen before in an English seaside resort. Acclaimed from every quarter for its revolutionary architecture and the quality of its interior, with outstanding works by leading artists of the day, the Midland Hotel was unique. Resplendent on the promenade, its gleaming facade promising a bright future, the Midland was seen as the town's 'white hope'. in World War Two it was used as a hospital before being sold into private ownership. By 1902 it had fallen into disrepair and was only just saved from demolition. A multi-million pound project was launched to renovate and rejuvenate the building which re-opened in 2008.
We would have liked to have stayed in Morecambe longer. but we had a long way to go and had to fight our way around Lancaster and out on the A6 and decided to pull off to have lunch at Galgate - an old mill town/village where we had a picnic in the grounds of the church and then coffee at a small cafe within the old mill building.

Galgate once had a thriving silk industry and many of the installations still stand. Rhubarb grows wild in the vicinity and the community newsletter is known as the Rhubarb City News.
​
Galgate had a water powered corn mill, which was replaced by the 1792 stone three-storey wooden beamed mill of Thompson, Noble and Armstrong. It had a projecting stair tower and mill pond, with cast iron pillars inserted later.The second three storey mill was built in the early 1800s, made of stone with internal cast-iron pillars and a seven aisled roof. The third mill from 1851 is a five storey brick built mill - source wikipedia. Images of Galgate are included below.