Over the past few years I have been fortunate to either receive awards myself or be involved in groups within the village that have achieved awards. In this section I would like to list just some of these and my involvement:

Over the past 15 years Hethersett has received the following awards:

Individual Hethersett groups and their awards:

In 2012 I was one of six residents in South Norfolk to receive a Queen's Diamond Jubilee Inspiring Achievement Award for services to Hethersett over 20 years. I won the Inspiring Achievement Award for what was described as "an outstanding contribution to Hethersett over the past 20 years." ﻿Click here ﻿to see coverage from the Eastern Daily Press newspaper. Also in 2012 I was named Hethersett and Tas Valley Cricket Club Clubman of the Year.

In 2013 I was also named a Champion of Norfolk at the Royal Norfolk Agricultural Show and received a certificate from television personality Jake Humphries.

In 2014 I was a runner-up in the Sport Volunteer of the Year awards organised by South Norfolk Council as part of their Community Awards.

In 2015 I was awarded the Lee Thompson Memorial Trophy for outstanding contribution to Hethersett Athletic Football Club. I was previously made an honorary life member of the club.

In 2018 I was awarded the Lee Thompson Memorial Trophy for outstanding contribution to Hethersett Athletic Football Club to mark my retirement. I was very proud to be only the second person to win the award twice.

​In 2019 I was made an honorary vice-president of Hethersett and Tas Valley Cricket Club after retiring as club chairman and development officer.

In 2020 I was honoured to be made an honorary member of the Royal Norfolk and Royal Anglian Regiment Association. This honour was bestowed on members of the Le Paradis Commemoration Group in recognition of their work to bring the death of 95 soldiers from the Royal Norfolk Regiment, the Royal Scots Regiment and others to public prominence and to raise awareness of Le Paradis Massacre of 1940.

The Awards in Detail 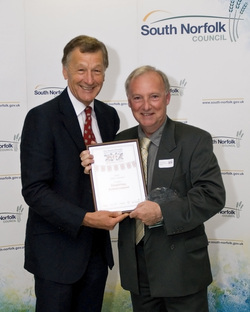 I was very honoured to receive this award at a special presentation evening at the John innes Institute just outside Norwich.

"Peter has been Chairman of the Hethersett Athletic Football Club for the past 19 years. The club caters for both male and female players across all age ranges from under-10s through to adult sides. Peter successfully championed the introduction of a women's team to the club.

He is also involved with the Hethersett and Tas Valley Cricket Club, where he has taken on the role of club development officer. He successfully applied to the ECB for clubmark accreditation which involved many hours of work.

Peter was responsible for the formation of Hethersett and the Meltons Sports Association and organised Hethersett's entry into the 2011 Norfolk Village Games which saw them come in second place.

Since its inauguration, Peter has been a vital part of Hethersett's hugely successful Olympic Committee. The three years of events and fundraisers in the run up to the Olympic Games was recognised when the Olympic flame was brought to Hethersett in June 2012. The picture above shows me receiving the award from BBC Television's Stewart White.

2012 Eastern Daily Press Norfolk Community of the Year (Over 5,000 Population) 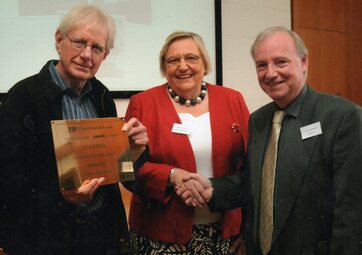 The citation for this award read as follows:

"Hethersett is far from a 'dormitory community' for Norwich based commuters. With a growing population currently standing at 6,000 Hethersett truly has a 'village feel'. For the last three years, the very active Olympic committee has organised more Olympic-themed sporting and cultural events per head of the population than anywhere else in the UK. This achievement was recognised with a visit by the Deputy Chairman of London 2012, Sir Keith Mills, and a truly unique off-route visit by the Olympic Flame during the Torch Relay.

More information about Hethersett can be found on their website www.hethersett.org.uk 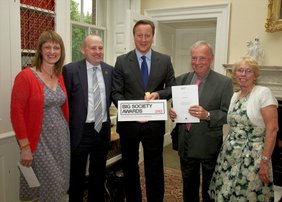 At the Downing Street Reception.
In 2012 I nominated the village of Hethersett for this top national award after reading a plea from Prime Minister David Cameron to create a Big Society. My motivation was the fact that in Hethersett the Big Society has been operating for decades and so this idea was nothing new for us. I felt that the thousands of volunteer hours put in by hundreds of people should be recognised further than just in Norfolk.

Early in 2013 I heard that Hethersett had become the first village or town in the entire United Kingdom to receive a Big Society award and this gained a considerable amount of coverage in the local Media (photographs of this are in the Media Coverage section of this web site). This culminated in my travelling to London along with my wife Anne and fellow village activists Shane and Lorraine Hull for a reception and presentation at 10 Downing Street where we were presented with a certificate on behalf of the village by David Cameron.

Members of the winning team in 2013
Hethersett entered the Norfolk Village Games for the first time in 2011 after I had been appointed Active Norfolk Sports Co-ordinator for the village. With a team of over 50 people of all ages from eight to over 80 we have fielded entries in every one of the sports featured over the past three years.

Despite competing against market towns with much larger populations, Hethersett and the Meltons won the South Norfolk Village Games in 2011, 2012, 2013 and 2014 and were runners-up to Downham Market in the county finals in both 2011 and 2012. In 2013 we were runners-up in the county finals to Diss, but in 2014 were finally crowned county champions. 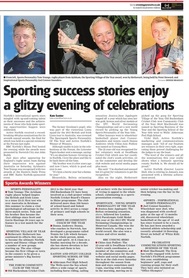 Norfolk Sports Village of the Year - 2013

I represented the village in my capacity as chair of Hethersett and the Meltons Sports Association and picked up the trophy at a special presentation evening at Norwich Forum on November 6th, 2013. The trophy was presented by Norwich City and England international goalkeeper John Ruddy.

In 2014 we were a runner-up in the Norfolk Sports Village of the year, losing out on the title to Fakenham.