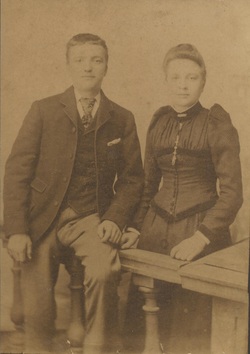 Arthur William and Elizabeth Steward
The name Arthur Steward features regularly in my family tree over the generations. Opposite is a photograph of Arthur Steward who had a tragically short life. He was born in 1872 and died at the age of 28 in 1900 as the result of a road accident.

At the time of his death his children would have been aged nine, seven, six and four.

Elizabeth subsequently married George Lambert in 1901. At the time of his death Arthur was living at No 2 White's Entry in Bull Close Road, Norwich. He had been to Yarmouth races and was riding in a wagonnette on Thorpe Road, Norwich, when he fell from the vehicle. He was taken to hospital but died on the way.

Arthur was a shoemaker by trade and had been one of the organisers of the trip to the races.