In August 2018 Anne and Peter covered over 930 miles on a 12-day road trip that saw us travel from our Norfolk home down to Tunbridge Wells in Kent and then to Eastbourne and Brighton in Sussex, up to Staffordshire and then onto the Lake District and Lancashire. Below is our travelogue of this trip.
On the left are Tom and Gladys Poore and myself outside The Spotted Dog and on the right myself and my parents - Arthur and Phyllis Steward - outside the pub on the same day in 1961. In the middle is a photo taken 57 years later in 2018. Note the pub sign hasn't changed. 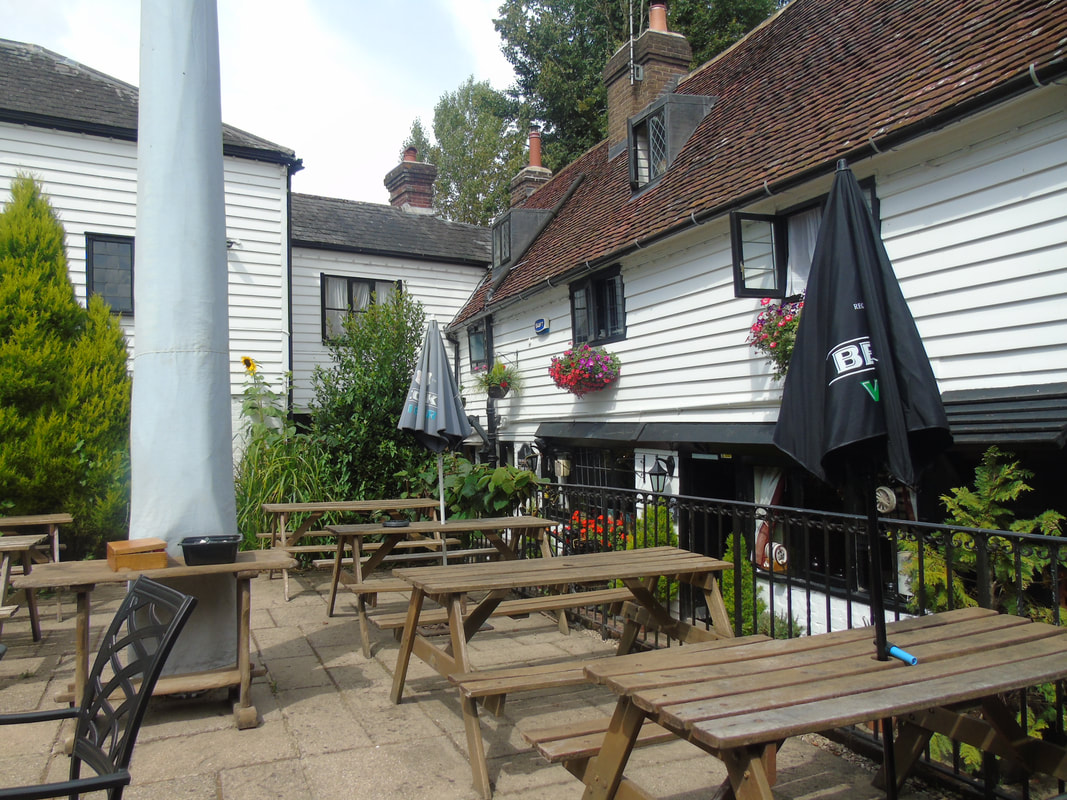 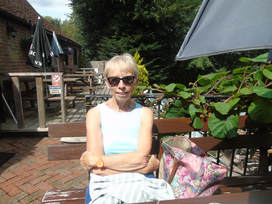 Anne in the garden of the Spotted Dog at Penshurst.
Friday 17th August - Penshurst and Eastbourne

Fifty Seven years ago I was staying with my parents in London (our holidays consisted entirely of visits to either London or Great Yarmouth - the capital was always a magic place for me). These visits to London (always in the last week of August as my father was a creature of habit) usually involved a journey down and often a stay with Uncle Tom and Auntie Gladys in Royal Tunbridge Wells.

On this particular trip we went to a pub I have always remembered as the Spotted Dog. Recently I discovered an album full of old family photos including one outside the pub. Sadly all of the photographs have no dates except for this one  which clearly states "The Spotted Dog - Penshurst August 1961."

A quick search on Google established that the pub still exists. So I wanted to return on our way to Eastbourne to have a 2018 picture of myself outside the pub. Thanks to Sat Nav, getting there was straightforward and it turns out to be about six miles from Tunbridge Wells and has changed very little in the almost six decades. The pub sign seems to be unchanged. Actually The Spotted Dog is a former 15th century inn on Smarts Hill in Penshurst.

After being fed and watered we set-off on the slow journey to Eastbourne to stay in our son's flat in Blackwater Road. No sooner had we made it to the sea front then the Red Arrows acrobatic display team thundered overhead. We had seen their display two days previously in Cromer. 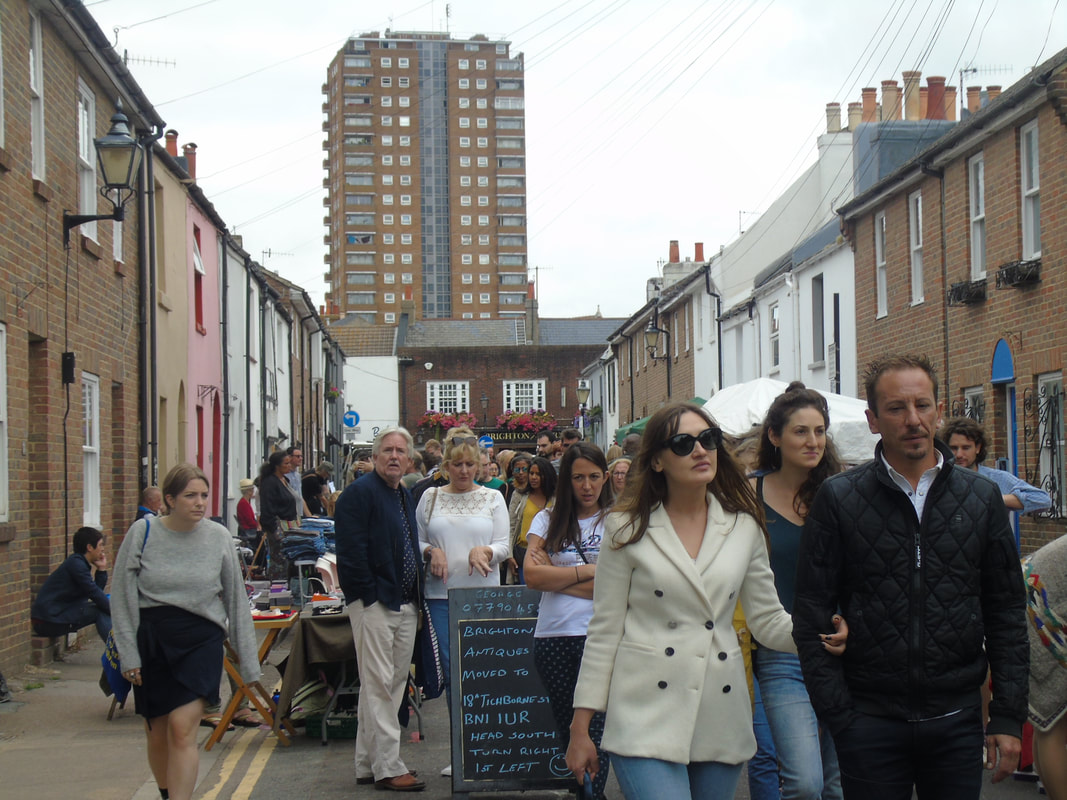 The busyness of an outdoor street market in Brighton at the height of summer.
Saturday 18th August - Eastbourne and Brighton

Anne is a big believer in doing her research and that's why we had a long walk to get some breakfast. She had read that Amy's Cafe in Seaside Road, Eastbourne, was highly rated. The food was certainly good, although we did have to wait about 45 minutes. To their credit we were made aware of this when we entered and so, having plenty of time, we decided to wait. Spent the rest of the morning in Eastbourne before catching the 12.32 pm train to Brighton - a journey that took just over half an hour.

Brighton always has been and always will be a rather strange place - full of contrasts. I suspect that I like it a little more than Anne who doesn't really come to terms with the more trashy and Bohemian aspects of the town. We were due to have an evening meal with friends and so had a long time to look round. Caught a bus to the Marina, had a pint at a Wetherspoons restaurant where the prices for drink seem to be half what they are at other places and then back into town for a leisurely stroll down the pier, some chips on the promenade. Also had a long look around The Lanes.

Made it to Bella Italia in North Street ahead of the rest of the gang. It was a meeting of the guys in the virtual reality music club that I am in. Imaginatively entitled Mr Blint's Attic we share our thoughts on music, politics and any other subject that appeals to us. The guys come from all over the place - Lancashire, Norfolk, Cambridgeshire, Wales, Northern Ireland and even Austria and the USA. We get together on an informal basis every year or so in various parts (usually in the UK).

​It was a fun evening that went very quickly and we had to hurry back to the railway station in time to catch the last train of the day back to Eastbourne. Miss that and we would have been sleeping on the station!
Sunday 19th August - Eastbourne and Lewes

Met up with friends Veronica and David Gooch today with a visit to the historic and very interesting town of Lewes where we found an unexpected Norfolk link.

​Caught the 11 am train from Eastbourne to Lewes and it took just 20 minutes. Met Veronica and David at one of the town's bridges and had lunch at a local cafe before a long walk around to appreciate the history of this county town. Below are just a few of the historic buildings including the local brewery. 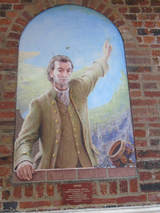 One of the most historic houses in Lewes is Anne of Cleves House. The house was given to Anne of Cleves (Henry VIII's fourth wife) on their divorce. Strangely despite the gift she never lived-in, visited or even saw the house and today it is a museum to Tudor life.

I mentioned above the Lewes Norfolk connection which came in the shape of revolutionary Thomas Paine. Paine was born in Thetford, Norfolk in 1737. He was a  political activist, philosopher, political theorist and revolutionary and one of the founding fathers of the United States as well as a supporter of the French Revolution.

Paine lived in Lewes from February, 1768. Lewes at that time had a tradition of opposition to the monarchy. He lived above the 15th-century Bull House, the tobacco shop of Samuel Ollive and Esther Ollive.Paine first became involved in civic matters when he was based in Lewes. He appears in the Town Book as a member of the Court Leet, the governing body for the town. He was also a member of the parish vestry, an influential local church group whose responsibilities for parish business would include collecting taxes and tithes to distribute among the poor. On March 26, 1771, at age 34, he married Elizabeth Ollive, his landlord's daughter.

Paine emigrated to the American colonies, arriving in Philidelphia on November 30th, 1774. Lewes has a Thomas Paine trail which follows his life in the town. A plaque on the wall of the White Hart Hotel pictured below

After a cream tea in some very pleasant gardens which had a sculpture of a couple of Lewes residents who helped make the Madrigal popular as a form of music, we set off to get the train back to Eastbourne - timing it to miss the airbourne traffic coming out of Eastbourne and the football crowds who had been to the Brighton v Manchester United match at the AMEX Stadium.
​Monday 20th August - Eastbourne and The Midlands 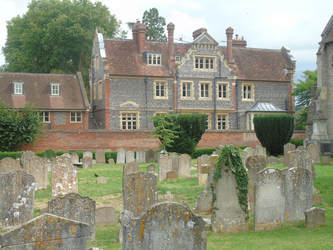 Much of today was spent on the road, travelling into the Midlands for an overnight stay at the Madeley Court Hotel at Telford. We did around 230 miles to break the back of the journey up to the Lake District. Loaded up the car and set off around 9.15 am. Initially drove across to Brighton to pick up the London Road and onto the M25.

This is without doubt the most horrendous road in the United Kingdom - a travellers' nightmare at virtually any time of night or day where the only game in town is dodging accidents and breakdowns and hoping not to get stuck in too many backlogs of crawling traffic. We just about managed to keep going but was glad to get off and head for the very pretty town of Marlow for lunch. Marlow is on the Thames and in Buckinghamshire. We went to a local cafe for lunch and then had a general look round and took a couple of photographs before my camera battery died.

We then continued on our journey going through Kidderminster, Bridgenorth and then skirting Telford. Booked in and found our room to be rather small. When we found the washing basin tap broken we visited the reception and got moved to another much larger and more pleasant room which makes you ask why we weren't given that in the first place when it was obviously empty.

Had a general look round and a walk through some woods and then enjoyed a drink on the outside terrace before moving into the bar when it started to spot with rain. Had a meal in there before going to bed. 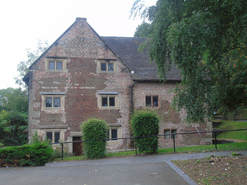 Another quite lengthy journey, but we took it in a number of stages making a number of pleasant stops. We took an early breakfast and were the only people in the restaurant for some time. The food was good and the service excellent. On the way out I played Elliot's Tune on the piano. Took some photos of the outside of the hotel and then set out on our journey.

​It wasn't far to Ironbridge and we parked just outside the town and went down quite a large slope and steps to the bridge.
Ironbridge, the town, is named after the first Iron Bridge which was built over the River Severn in 1781. It is the first bridge in the United Kingdom to be made from iron and was started in 1779 as an integral part of the Industrial Revolution. The bridge is currently being renovated and is surrounded by scaffolding. The original and the present day are photographed side by side below.
The town of Ironbridge was also very interesting with some unusual shops and a fine butchers where we got a pork pie for a very late lunch (not eaten until we reached our destination). Just a few of the pictures of the town/village are shown below. 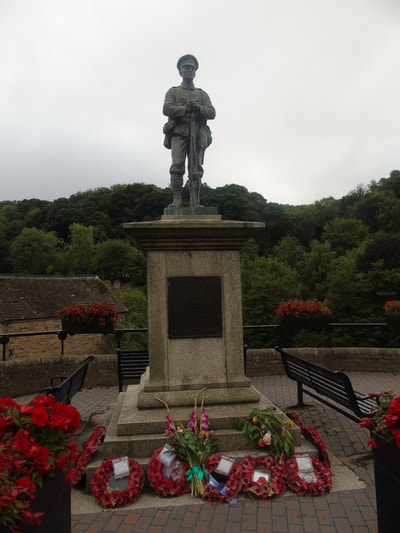 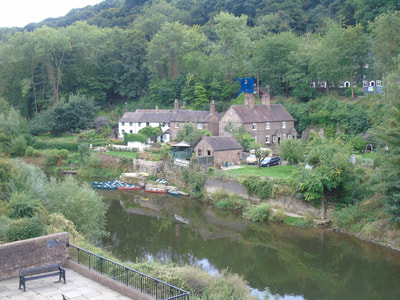 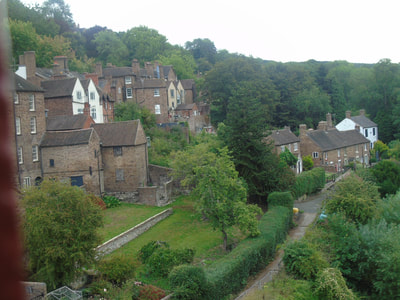 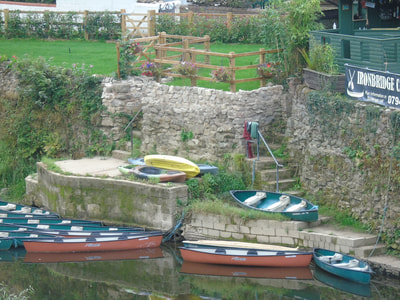 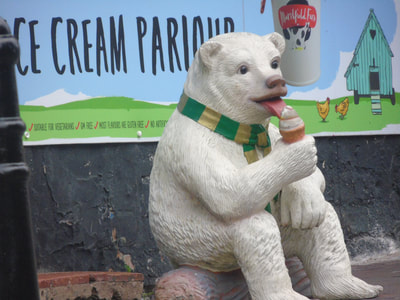 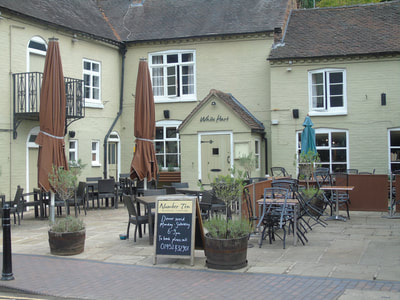 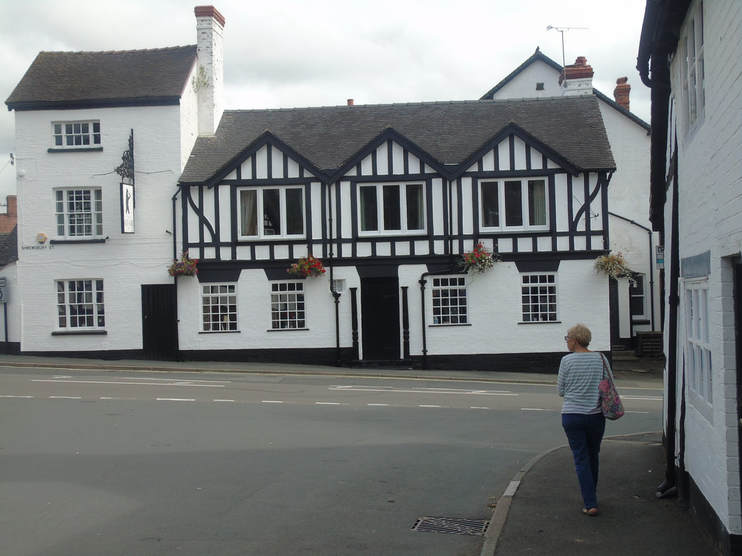 Our next stop was the small but picturesque village of Hodnet (pictured above) in Shropshire, a small village of just over 1,500 people where we visited the church and had a general look round before driving a short distance to Market Drayton which was a bog standard market town, but we found a pleasant tea room for a very fluffy scone and good coffee. There was also a very pleasant couple to have a chat with in the parish church. They offered us a cup of tea but we had to decline as we were full up from the coffee and scones. Back to the car to get to the M6 for the last 120 miles to our destination of the Holiday Property Bond home at Merlewood just outside Grange-Over Sands.
For part two of this travelogue click here.