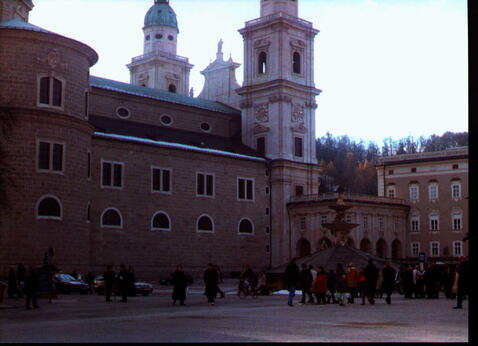 It seems unbelievable to think that a journey from Norwich to Austria takes less time than a trip to London. But it is so as we found out today. We flew to Salzburg, had about six hours sight-seeing, flew home and were indoors by 10 p.m!!

It was an early start at about 6 a.m. We were at Norwich Airport by 7.15 a.m and the flight to Salzburg took just under two hours.

Salzburg airport is about four miles from the centre but it was a slow crawl in thanks to the number of tourist coaches. The guide was entertaining, telling us about the writing of Silent Night and debunking the theory that in the Sound of Music the Von Trapp family waltzed across the fields to safety in Switzerland. "Had they have gone over those fields they would have entered Nazi Germany and been anything but safe. They actually took the train to Switzerland" - rather makes a lie of the "hills are alive with the sound of music" idea, but why spoil a good story with the truth?Six hours was just about enough to get a real feel for quite a compact city. The centre is full of picturesque, narrow streets and Salzburg is split into the new and old town by the River Salz.

Being close to Christmas the shops were bright and colourful and the best view of the town came from a long climb up to a monastary well above the roofs of the city.

The Cathedral was well worth a visit and as darkness fell the streets became very busy with people attending the Christmas market. Nothing new here but a welcome cup of mulled wine helped to pass the time.

Overall I would describe Salzburg as attractive and interesting, rather than essential. One day is just about enough to gain a feel for the place, but worth a visit. But of course if you are a Mozart fanatic there are always the Mozart chocolates, the Mozart guide books. His face appears everywhere and particularly around Christmas time!!!!