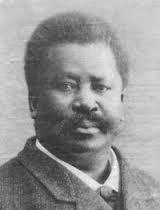 “For the benefit of Mr. Kite
There will be a show tonight on trampoline
The Hendersons will all be there
Late of Pablo Fanque’s Fair-what a scene “

I LOVE conundrums almost as much as I love family history and music. So you can understand my delight when the three occasionally come together. So let me explain what links a circus, the greatest pop band in the world and our beautiful city of Norwich.

The lines above come from the John Lennon song “For The Benefit of Mr Kite” which can be found on the legendary Beatles album “Sergeant Pepper’s Lonely Hearts Club Band.” Lennon wrote the song after buying an antique poster for a circus performance in 1843 by Pablo FANQUE’s Circus Royal. Lennon himself admitted that the whole song was taken from the poster, although the name of the horse was changed from Zanthus to Harry to simplify matters. The song has long become part of pop legend, but just who was Pablo FANQUE?

You may be surprised to know that FANQUE (pictured above left) was born in Norwich as William DARBY There are many discrepancies regarding DARBY’s age and birthdate which varies wildly from 1796 through to 1810. The blue plaque in Norwich gives it as 1810. DARBY’s early life is also shrouded in mystery. Some accounts suggest that he is one of five children born to John and Mary (nee STAMP) DARBY with the family living in Ber Street, Norwich. DARBY’s father is likely to have been of African descent and may have entered the Port of Norwich and been employed as a house servant. Other accounts are not quite so charitable. They suggest that DARBY was actually born in the workhouse which was located on the site of the present John Lewis store.What isn’t disputed is DARBY’s prowess as a circus performer. He was apprenticed to William BATTY and first appeared in a circus ring in Norwich in 1812, billed as “Young Darby”. His act included equestrianism and rope walking. Around this time DARBY changed his name to Pablo FANQUE - the reason for the name and how it was chosen again  seems to be lost in the mists of time. Many thought Pablo was actually his surname.

The Press were kind to DARBY/FANQUE with the Illustrated London News describing one performance as something “we have not only never seen surpassed but never equalled.”

FANQUE continued to gain a reputation as one of the greatest horsemen in the country and eventually started his own touring circus company - becoming the first Black circus owner. For 30 years the company toured England, Scotland and Ireland, including more shows in Norwich.

FANQUE/DARBY married Susannah MARLAW and they had two sons, both of whom followed their father into the circus world. Susannah was tragically killed when a wooden viewers gallery collapsed on her while she was watching a performance that featured one of their sons.

FANQUE continued to be a popular figure in the United Kingdom and a great benefactor, putting on benefit shows for others in the profession and also community organisations. He also raised money to assist families in times of illness or death with meeting burial costs and other expenses. DARBY/FANQUE died in 1871 and is buried in Leeds. His coffin stated that he was 75 years of age which would suggest a birth date much earlier than the 1810 on the John Lewis plaque.

Fast forward to the 1960s and a young John LENNON came across an 1843 circus poster for Pablo FANQUE’s Circus Royal while looking round an antiques shop in Sevenoaks, Kent and a rock legend was born. 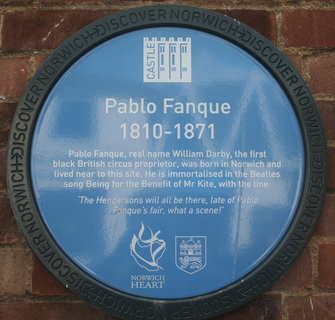