I have been involved in Hethersett and Tas Valley Cricket Club for over 30 years.

The club has a glorious history going back well over 160 years. There is evidence that cricket was played in Hethersett as far back as 1850. It was five years later that Hethersett Cricket Club was officially launched. A full history of the club from its earliest beginnings is available on the Hethersett web site which can be accessed by clicking here.

The club played at a number of destinations with its final venue within the village being on the Memorial Playing Field. Thanks to the generosity of the Ellis family, the club changed its name in 2008 to Hethersett and Tas Valley when it moved to a new purpose made ground at Flordon, about 20 minutes' drive from the village.

Today the ground boasts some of the best facilities in Norfolk with two pitches, electronic scoreboard, changing blocks, a clubhouse with bar - all set in wonderful woodland surrounding fishing lakes.

I played for Hethersett for a number of seasons and today our family is fully involved with the club. Son Matt currently captains the second eleven, having played for the Firsts for numerous seasons. Wife Anne makes teas and generally helps around the place and is a member of the club's social committee. I have just taken on the role of club chairman and am also Club Development Officer responsible for work on the nationally recognised Clubmark. I am also responsible for providing copy for the Media and arranging an annual charity match in aid of the Wymondham based Star Throwers charity. Below are Media cuttings of reports submitted to the Media 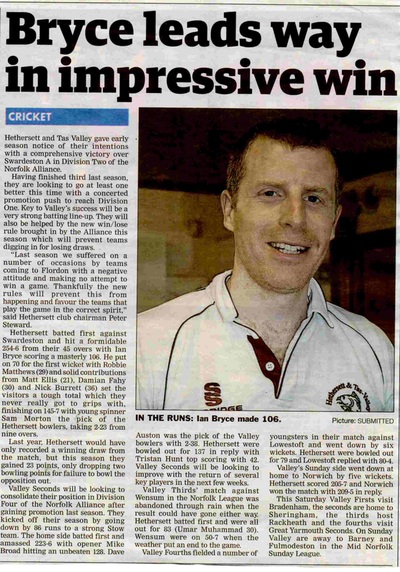