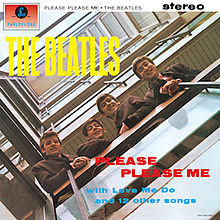 The band's first album was released in March 1963 when I was 10 years and five months old. Sadly I cannot remember being particularly interested in music at the time. I do remember having a wind up 78 gramophone which as it name implies had to be cranked up by hand and had needles which had to be replaced every few plays. The needles came in small tins and the records were made of shellac and smashed if dropped on a hard surface. I had a few records for this machine. most notably Good Golly Miss Molly and a few others by Little Richard and I guess that was my first introduction to Rock n Roll.

I vividly remember my grandmother thinking that the music was so evil that it would actually damage the gramophone. Of course that made me play Little Richard all the more, although I never really go to like him, let alone know that he was black at a time when racism was certainly rife in Norfolk. Of course this was all before Merseybeat hit the airwaves. Good Golly was recorded in 1956 when I would have been under four years of age. So I guess the gramophone made an entry into our household sometime later.

By the time Please Please Me came out I would still have been a pupil at Kinsale Avenue School in Hellesdon just outside Norwich, prior to moving for secondary education to the Norwich School.

I would like to say I remember this album coming out, but I simply don't, but as the years passed the Beatles became an ever-present in the lives of so many young people. My assessment of the Beatles' music can therefore only come from hindsight and listening to them over and over again over the years.

Please Please Me was rush released to build on the success of the hit singles Please Please Me and Love Me Do. Eight of the songs were written by John Lennon and Paul McCartney, with the remaining being covers. By its nature this was always likely to make it a patchy album and so it proved. Not a single track weighed in at over three minutes and three of them were under two minutes in length. It did showcase the emergence of Lennon and McCartney as songwriters with the opening track "I Saw Her Standing There" showing their intent with good solid guitar driven rock/rhythm and blues and "Misery" featuring the almost guttural harmonies of the two songwriters with lush chorus and cascading keyboard work from George Martin.

After just two tracks it is becoming easy to see the kind of stir that the album caused. It remained at the top of the album charts for 30 weeks until replaced by "With the Beatles. This in itself was an amazing achievement as at the time the album charts were dominated by film soundtracks and crooners. Suddenly music was being overtaken by a new sound from four young men who were capable of writing their own powerful pop songs.

Some of the material on Please Please Me does have the feeling of being filler but songs like "PS I Love You," "Do You Want to Know a Secret" and "There's A Place" begin to show the growing power of the songwriting.

Favourite Track -  PS I Love You - credited as having been written by Lennon and McCartney but with a big McCartney feel to it.