Over the years I have seen Barclay James Harvest in concert on numerous occasions. Some of my reviews I managed to keep copies of and these feature as part of my Concert Review section below.

It was a long wait. I don't really know what I was doing there anyway. The college's social secretary Steve Clarke told me he had signed an interesting band by the name of Barclay James Harvest. Steve, like me, came from Norwich and went on to become a respected rock critic. I was at a loose end that evening so decided to pop along.

I seem to remember there were a succession of bands, all of whom I thought were BJH. They were all interminably boring and I very nearly went back to my digs. Thankfully I stayed. I have to vote this my greatest gig ever if for no other reason than it changed my musical life forever.

In modern day parlance I was simply blown away by their prog rock. I pretended to a friend that I knew their music (that's the kind of thing you do when you are 19, not wanting to sound ignorant). I agreed that Mockingbird was sublime without having heard it.

After 35 years I still think Mockingbird is sublime and now I've heard it hundreds of times!!!! I loved the performance, I loved the "exploding" organ at the end of After the Day, I loved the whole feeling of theatre. It was a night to remember and one I will never forget. I have written at length about BJH on this site, but this really was a musical experience of the best kind. I even managed through the official Barclay James Harvest web site to track down a poster of that event. 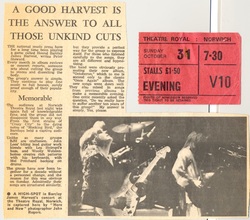 Many years separate all these concerts and it's now difficult to remember them individually. Probably the earliest of the three was at St Andrew's Hall where the support band was Rare Bird. I seem to remember it as the first time I heard the extended versions of Summer Soldier and Medicine Man. The acoustics were very good and it was another excellent BJH night.

For some reason I remember the Theatre Royal concert as very disappointing. I am sure that I wrote a review in the Eastern Evening News which attracted the headline "Good but not Golden Harvest." Not sure why I was disappointed, but perhaps the band failed to play its best material.

One of the two concerts at the UEA were to celebrate the band's silver jubilee - a romp through their best material. The other I seem to remember as being enjoyable without being able to recall the specifics. 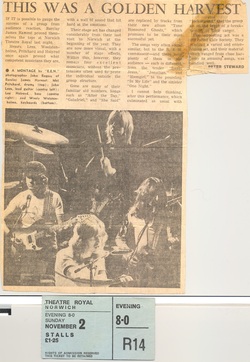 Back in 1971 they forever set the standard for me for rock music. Little did I think that almost 35 years later I would be listening to the self same songs. I imagine that at the age of 19 I didn't even have a concept of what 35 years was!

So I had a feeling of almost light-headed euphoria as I waited with friends for the UEA appearance.

It is many years since I last saw BJH. I think it might even have been their 25th anniversary tour and it was a sobering thought that three-fifths of last night's band probably weren't even born when John and Woolly were writing most of these excellent songs.

The band was tight without destroying the spontaneity of the playing and John, hunched over his guitar in typical style, was spot on all evening.

Woolly was a real star - playing to the audience and seeming to enjoy every minute. He made reference to returning to Norwich and certainly I have seen the band at least five times in the city at three different venues.

As I listened to the likes of Galadriel, Mockingbird, The Poet and After The Day I tried to transport myself back to how I felt in 1971.

Today I cannot remember much about that defining evening - who I went with, whether I had too much to drink, how I got home - but I do remember being "blown away".

More than anything this 2006 concert taught me that you cannot return to the past but you can keep the memories alive.

If I have one criticism of the show I would have liked to see John smile a few times. He seemed to be struggling to enjoy the evening (something I'm sure that wasn't the case) and I would liked to have heard more from him and more about the songs that have meant so much to me over the years.

It was almost as if the band was actually Woolly Wolstenholme's Barclay James Harvest.

Musically it was excellent. Mockingbird has undergone a number of changes over the years, none of which have destroyed its beauty and Medicine Man was blistering. Suicide? was another highlight and The Poet/After the Day brought a fitting climax and should have been the last number. That's only a personal preference, however, as Hymn has never been a great favourite of mine.

I was sorry that She Said wasn't included. I had seen the set list before the evening so knew exactly what to expect. It is sad that there is no longer such a thing as a genuine encore in rock music. The return to stage to play one, two or three more numbers seems nowadays to be totally planned rather than spontaneous.

But these are all minor moans in what was a memorable evening.